This site uses cookies. For more information please refer to our Privacy Policy & Cookie Policy
Learn more
I agree
search
Join
Login
English expand_more
Deutsch
Español
Português
Suomi
Deposit & Play
Login
Join
search
%mobileBottomLinks
maps_ugc Chat
English expand_more
Deutsch
Español
Português
Suomi
Forgot password?
Games
Live Games
CASHBACK
Community
%sublinks
%mobileBottomLinks
Refer a Friend Offers Bonus Terms Terms and Conditions Privacy Policy Cookies Policy Responsible Gaming Payment Options Affiliates Contact Us
%mobileHeaderLinks
Got error? Please tell us
Play over 2000 games with 200% bonus +100FS! Get Bonus
warning Due to the gaming legislation in Germany, you will be charged with a tax of 5.3% on all real money wagers. When making a real money wager of €1, an additional fee of €0.053 will be charged. For bets of €0.10, you will be charged with a tax of €0.01. You can track tax collected for each stake on the 'My History' page. Contact us for details or visit FAQ.
It's time to take a break As 1 hour have passed since you started playing, please have a short break of 5 minutes. Meanwhile, take a look at your results
Your Activity
Time logged in:
Total wagered:
You have won:
CONTINUE
QUIT GAME 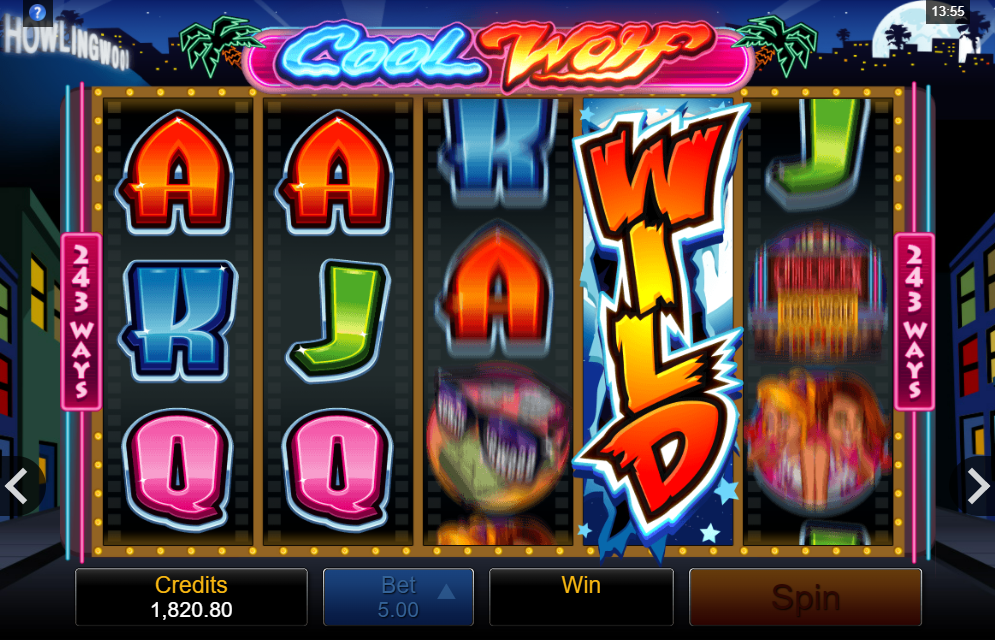 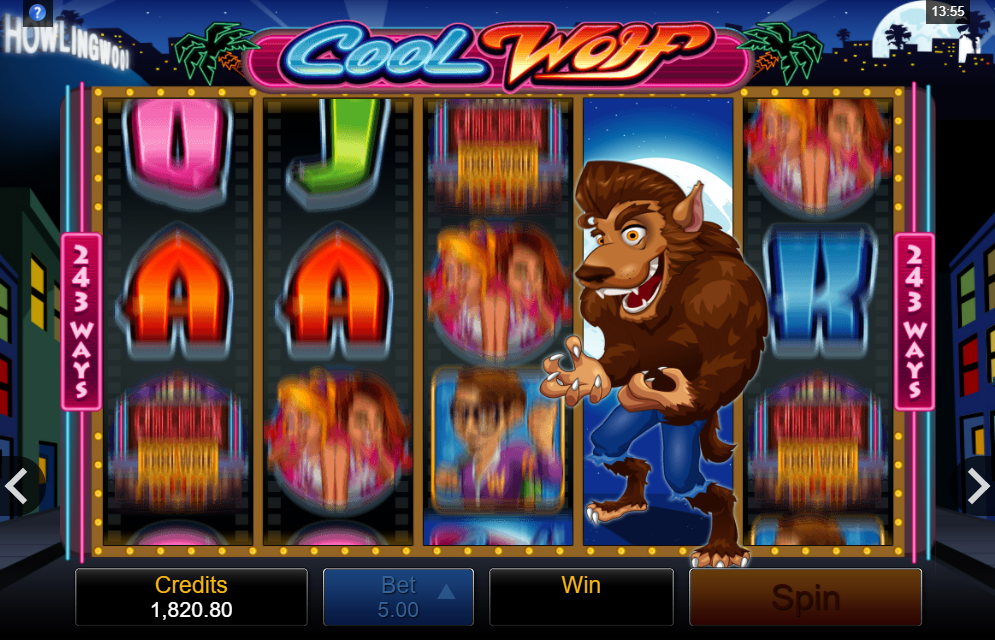 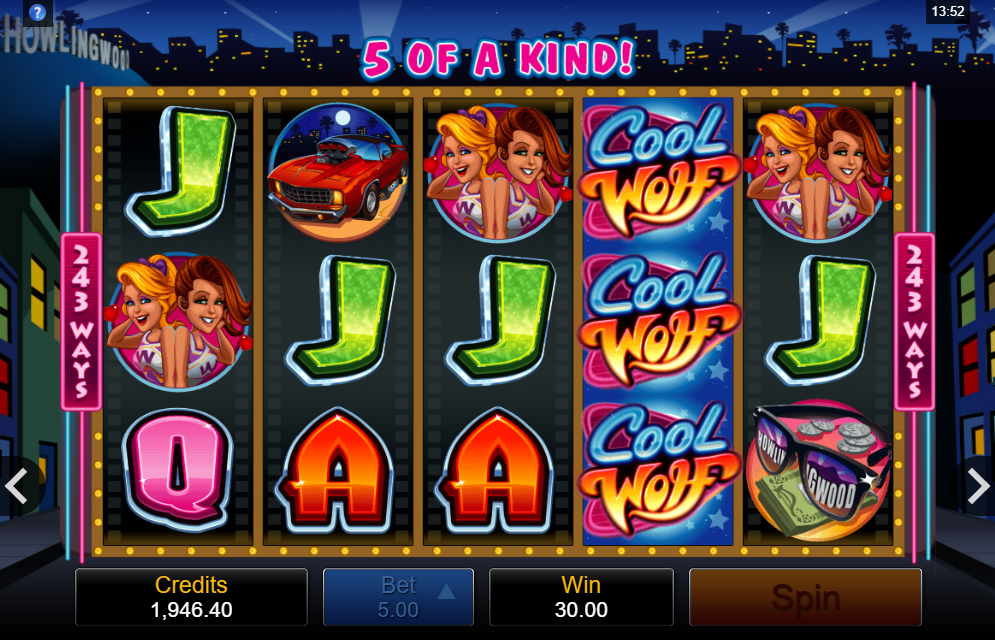 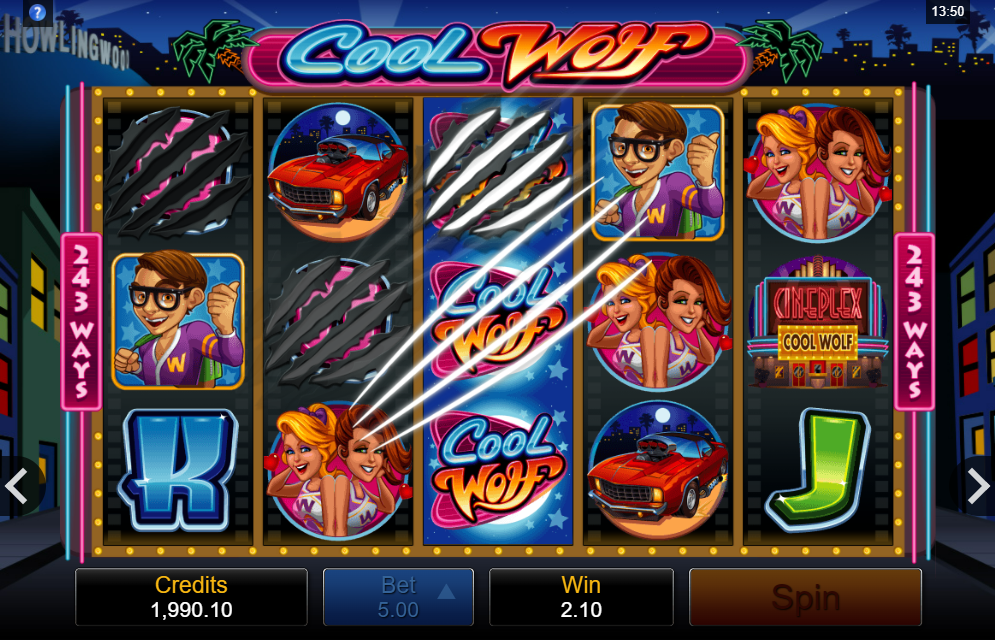 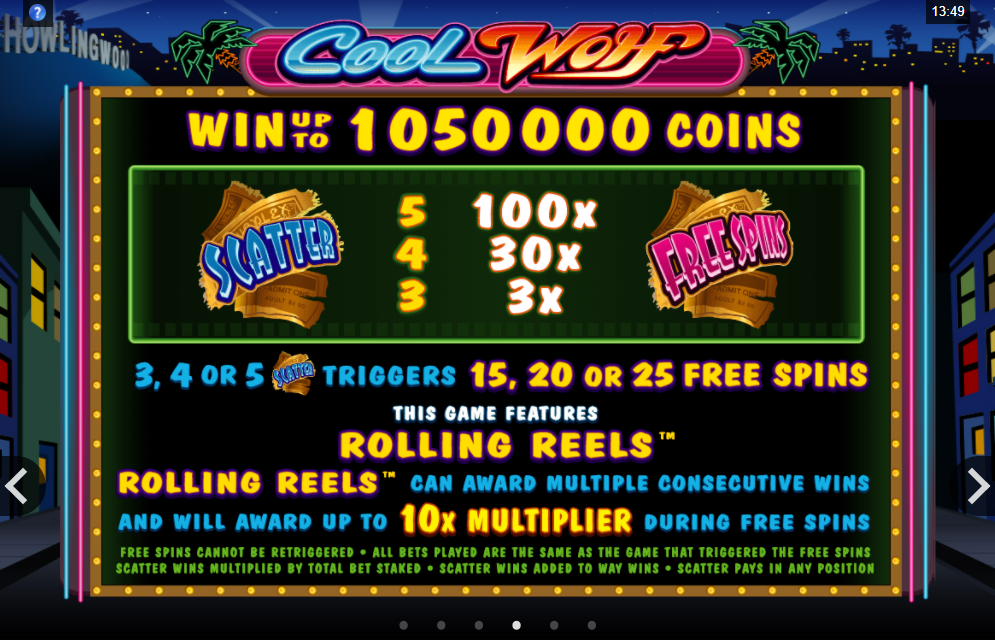 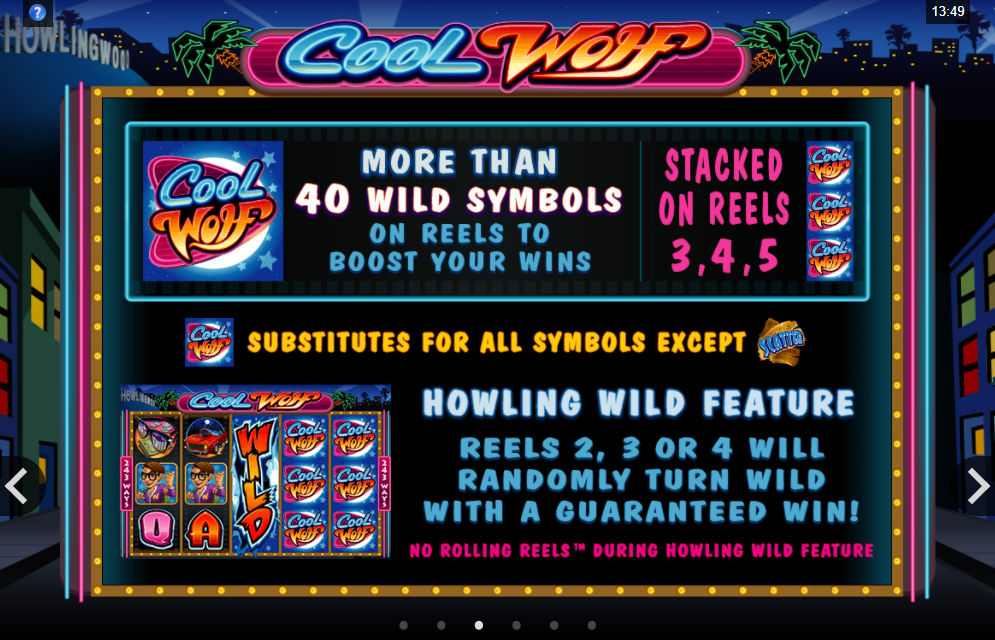 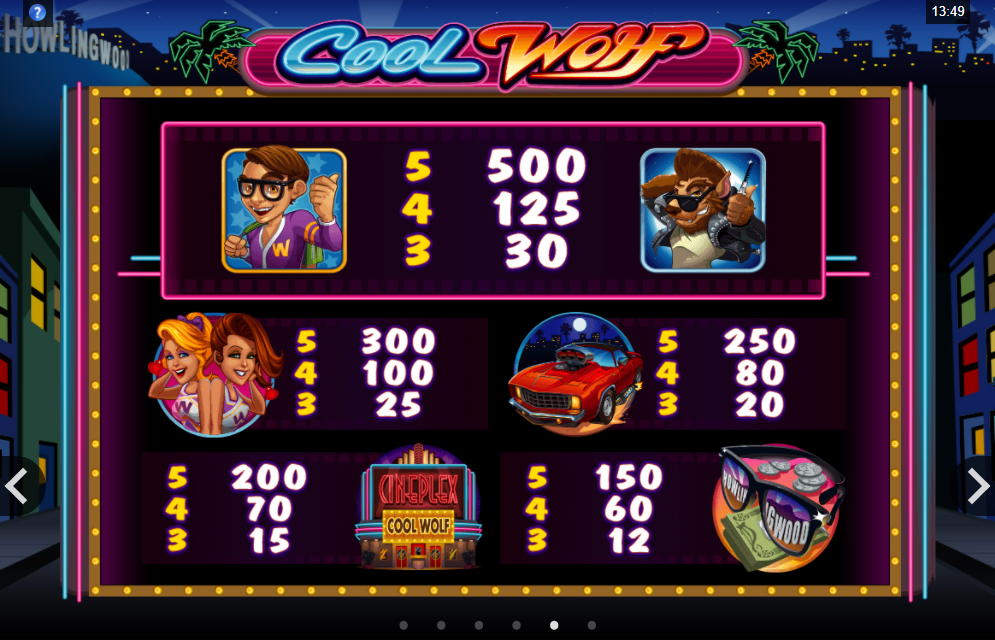 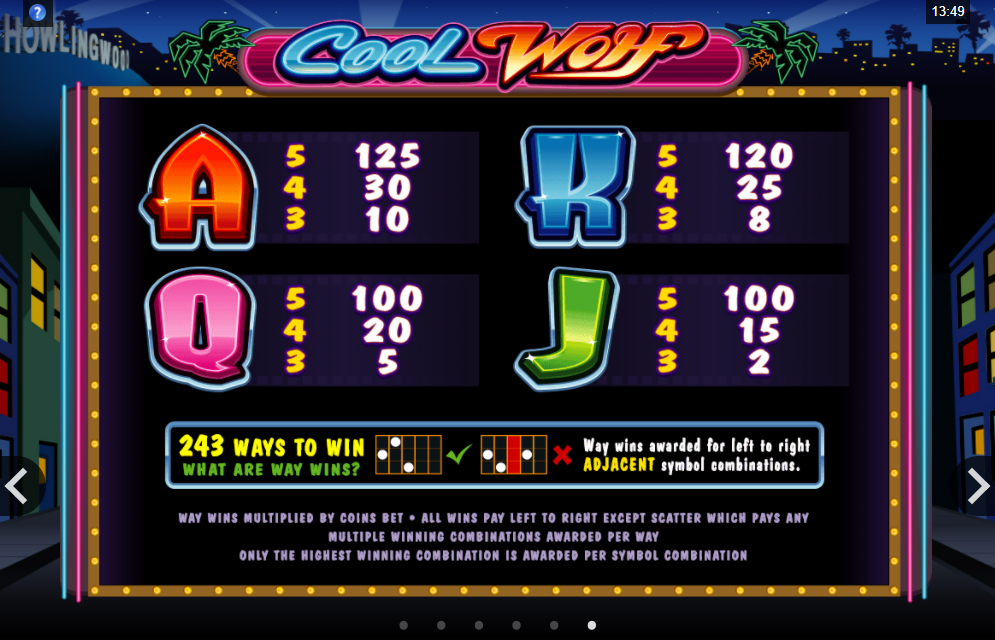 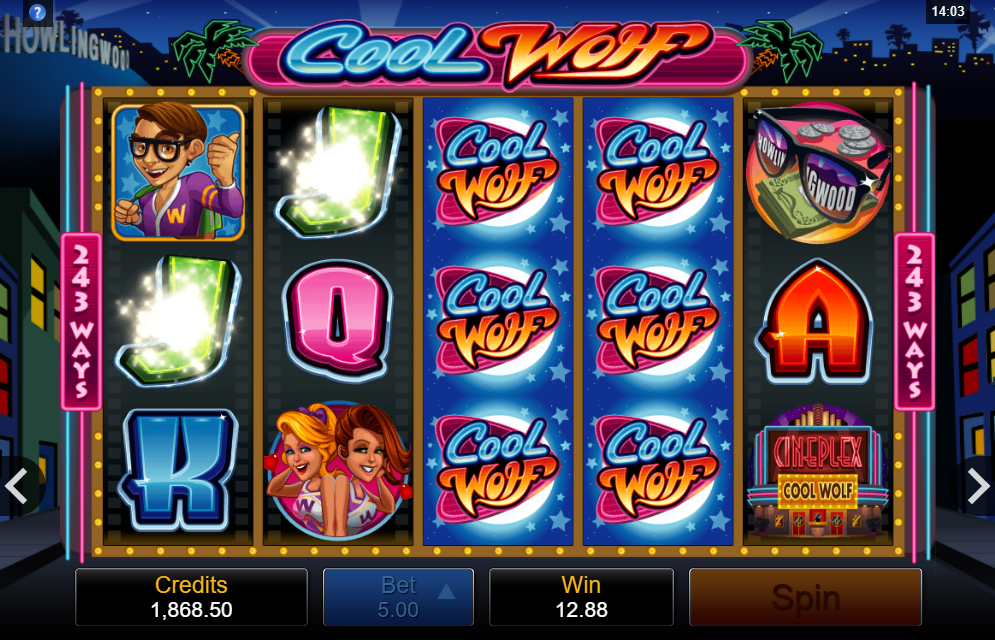 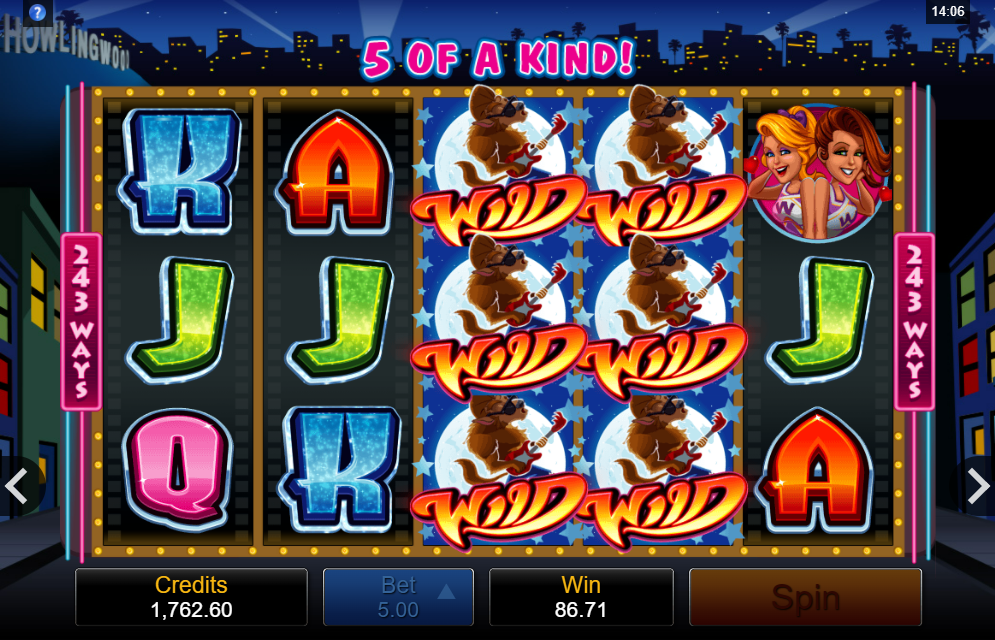 The Cool Wolf game contains a great Rolling Reels feature. Once the winning combination occurs, all the symbols which form it are torn with claws and the new portion of symbols fall dawn. It continues until there are no more win combinations on the screen. As in many slots games online free bonus games can be found in this online slot game too.

Three or more Scatters provide you with free spins. During the bonus game the Rolling Reels feature influences the win multiplier. The more win combinations you get the bigger your multiplier grows. The Howling Wild feature can be triggered randomly. Second, third or fourth reels turn into wild and bring you guaranteed winnings. The Howling Wild feature disables Rolling Reels. Stacked Wild symbol is also present in the game. All Wild symbols can replace any symbol, except the Scatter symbol.

Play the Cool Woolf slot and discover many cool bonus features which will lead you to the great prizes.

Your feedback about Microgaming`s Cool Wolf slot game would help us making HeavyChips more interesting and useful for our customers, so please rate this game. Your opinion is very valuable to us!

Microgaming is one of the leading providers of casino gaming software, and Cool Wolf is one of its most popular slot games. It has a unique horror movie theme that adds to its appeal, with cartoon graphics and big payouts. The game also has plenty of bonus features, including stacked wilds, free spins and the Howling Wild feature that can double your winnings up to 10 times. That makes it a great choice for both casual and experienced slot players, and you’re sure to have a lot of fun playing Cool Wolf slots from Microgaming.

Cool Wolf is a slot game developed by Microgaming, featuring 5 reels and 243 ways to win. The game is set in a bright and cheerful cartoon-style, and the main character is a teenage werewolf on a mission to win big. Players must spin the reels to match up the different theme-related symbols, including cool cars, awesome girls and basketballs. The game also includes two bonus features: Rolling Reels and Howling Wilds. Rolling Reels gives players the chance to win multiple times on one spin, while Howling Wilds randomly adds wilds to the reels, increasing chances of a winning combination. Additionally, the Cool Wolf logo acts as a scatter symbol, unlocking 15, 20 or 25 free spins, depending on how many you spin. With fun graphics and bonus features, Cool Wolf is sure to excite slot players everywhere.


Tell your friends about it and benefit from our Refer a Friend program!
Learn more